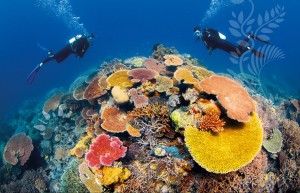 The Great Barrier Reef off Australia is being bleached, almost beyond recovery. This happens when water temperatures rise, causing the coral to expel the algae that live in them as a stress response.  Pollution and poor water quality also contribute to the Reef’s potential demise. The result is death over a period of time.

So what, you say?  Who needs it?  We do! Not only does it provide shelter and protection for a a greater variety of marine organisms than any other place, it helps recycle nutrients, assists in nitrogen and carbon fixing, and protects coastlines.  Perhaps more importantly, it forecasts global warming as much as the melting of the polar ice cap.

The coral can recover if temperatures go back down.  But what is the likelihood of that happening?  You tell me.

A few months ago I saw a video about hermit crabs of various sizes lining up in order of size to switch shells.  Those that outgrew their shells would move out and the next in line would take that shell.  Only the largest hermit crab had to find a new shell.  Ingenious. 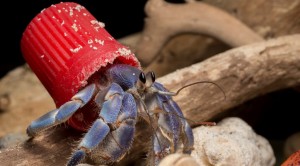 In another example of their ingenuity, some hermit crabs are using plastic bottle caps for their homes (see photo from trueactivist.com).  Now I thought this was just their being clever, but a couple of points stick out.  First of all, many are doing this because sea shells can become too flimsy due to pollution.  Second, there is so much darned plastic in the ocean, it is sometimes easier for a hermit crab to find a sturdy bottle cap than a proper shell.

That makes me sick.  How about you?

Please, please think twice before you discard any garbage, especially plastic, into anything but a proper receptacle. You can say that large manufacturer and car companies are ruining our environment. But remember that when it is you who are contributing to pollution. 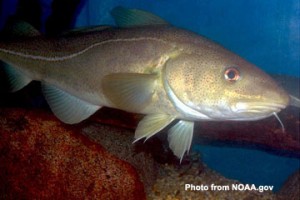 According to onekindplanet.org, among the Top Ten endangered species due to climate change is one very familiar to folks from Massachusetts–the Atlantic Cod. My last post focused on the Pacific Salmon so from sea to shining sea the most popular fish on both coasts are being threatened.

To be fair, with the cod (Gadus Morhua), It is not just environmental issues that are the problem.  Cod has been overfished for a long time, although stricter limits have partially reduced that concern. What is it about global warming that is having such an impact on the Atlantic Cod?  The thinking is that the warming waters decrease the amount of zooplankton, which are critical to the growth of young cod. Plus, the higher temperatures force the fish, especially younger ones, into deeper waters they are not familiar with and where new predators exist.

It will continue to be a downhill spiral until we take more action. I hope this blog helps.  Let me know what you are doing.

I’ve thought about writing a modified version of the Pete Seeger song, “Where Have All the Flowers Gone,” and change it to focus on salmon, the beautiful, tasty fish that I spent several summers commercial salmon fishing for with my dad when i was a teenager on the Oregon Coast.  Back then, it seems like there was an endless supply.  In my newest novel, Chickamin Bay, I write about a $1,000-dollar day (spoiler alert!), a day that Jack Richards and his father, Lefty, set the record for most money made fishing in a single day.

Slowly but steadily, the amount of salmon caught has been reduced, by overfishing, pollution, and global warming.  Today, it is a shadow of what it once was. In the great Columbia River, fisheries biologists report that over a quarter million Sockeye salmon have died due to warming waters.  Biologists say that a salmon can lay 3000 eggs. Only about 15 percent hatch and of those, about 30 live through the first year, four make it to adulthood, and two live long enough to spawn. You mathematicians can calculate how many salmon have to lay how many eggs to reach 250,000 dead fish.

Obviously, it isn’t only salmon that are suffering from global warming.  Virtually every animal species is too, including you, my friend. Do your part to overcome this dire issue.  If you don’t believe in global warming, will it really hurt to do your part by investing in solar panels, an electric vehicle, or switching to CFL light bulbs?  In fact, you’ll save money at the same time.

I’ve tried in all my works of fiction–The Ages of Oosig, With Which the Waters Swarm, Lefty’s Tavernacle, and now Chickmain Bay–to drop gentle hints about the negative effects of pollution and global warming.  Perhaps the next one will have to be a little more forceful.