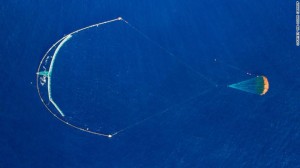 This missive is a follow-up on my last blog, which mentioned that there is a glob of plastic garbage as large as Texas floating around the Pacific. Ocean Cleanup, a Netherlands-based nonprofit, has invented a “floating vacuum cleaner” that is capturing large plastic items and tiny microplastics.  It actually isn’t a vacuum cleaner; it is the Rube Goldberg device shown in the photo.  At one end is a parachute intended to slow the unit so it doesn’t miss garbage.  Although it is pretty kludgy-looking, its inventor says it works and, after refining it, they plan to launch an army of these things.  They believe they can reduce the amount of plastic in the ocean by half every five years and cleanup 90% of the ocean waste by 2040.

Personally, I applaud anyone making an effort to clean up the ocean, since there are a lot of people who seem to want to clutter it. So if you are on the Pacific one day and see this thing floating toward you, make sure to place your plastic bottles in a safe spot or you might lose your deposit.

The Gumbo Limbo Nature Center in Florida showed photos of a dying baby turtle found to contain 104 chunks of plastic in its stomach.  Small enough to fit in your hand, the turtle was emaciated and starving and died soon after it was in the Center’s care. A turtle rehabilitation specialist said many baby turtles die this same way, with plastic instead of food in them.

For more than 30 years, Ocean Conservancy has brought together more than 12 million volunteers from 153 countries to participate in our annual International Coastal Cleanup. Yet it not nearly enough just to clean up after polluters.

Although movements such as toward electric cars has been positive for the environment, petroleum companies that produce gasoline have had to seek alternative business opportunities, such as plastics. More than eight million tons of plastics are disposed of in our oceans each year. One concentration of ocean-going plastics is known to be the size of Texas. The Great Pacific Garbage Patch is exactly what it sounds like.

What can you do to help?