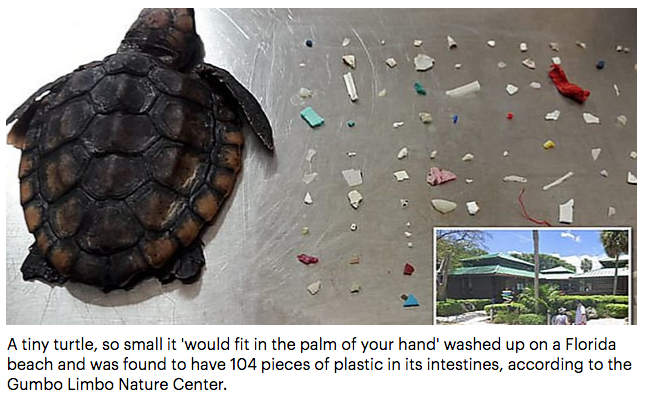 The Gumbo Limbo Nature Center in Florida showed photos of a dying baby turtle found to contain 104 chunks of plastic in its stomach.  Small enough to fit in your hand, the turtle was emaciated and starving and died soon after it was in the Center’s care. A turtle rehabilitation specialist said many baby turtles die this same way, with plastic instead of food in them.

For more than 30 years, Ocean Conservancy has brought together more than 12 million volunteers from 153 countries to participate in our annual International Coastal Cleanup. Yet it not nearly enough just to clean up after polluters.

Although movements such as toward electric cars has been positive for the environment, petroleum companies that produce gasoline have had to seek alternative business opportunities, such as plastics. More than eight million tons of plastics are disposed of in our oceans each year. One concentration of ocean-going plastics is known to be the size of Texas. The Great Pacific Garbage Patch is exactly what it sounds like.

What can you do to help?