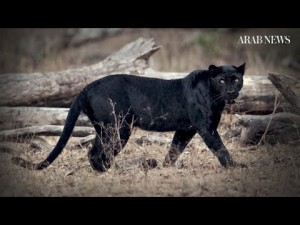 Although technically a black leopard, the black cat in Kenya captured on night video recently is extremely rare.  In fact, it’s the first documented there in over 100 years!  Residents of Kenya have claimed to have seen them but no one has been able to verify the sightings until a team of biologists did.  It took them months.

During my last-year’s trip to Kenya and Tanzania, we were lucky to see regular spotted leopards.  They are one of the most elusive animals in Africa.  We watched one in a tree for several hours before I was able to get an acceptable shot of it.