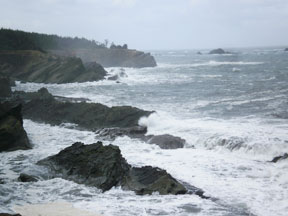 One day I realized that I have seldom lived more than a couple of miles from an ocean in my entire  life.  Growing up in a fishing village on the Oregon Coast, I never gave a thought to it.  Our home overlooked the ocean; I worked on my father’s salmon fishing boat during summers; while in college, I had a flagman’s job on a bridge that fishing boats crossed under; I worked at the Sunset Beach State Park.

Then, in the Navy, after boot camp on San Diego Bay, I was surrounded by ocean while stationed on Guam.  I even flew on seaplanes down to many of the small islands in the Mariana Islands, islands where water/land battles were fought during World War II.

All of this is a way of saying it’s no wonder that the novel I’m just ready to publish, With Which the Waters Swarm, and the others I’m working on, all involve an ocean or two.  No matter how I’ve tried to steer my writing elsewhere, that darned water won’t let me.  Is that a bad thing?  Of course not.  But what it means is that you readers will have to put up with my infatuation when reading my books.  Of course, that’ll be easy for those of you who also love the ocean.  If you aren’t water fans?  I hope I can convert you.