As I understand it, the correct term is just “sea rays, of which stingrays are one group.”  But yes, they can “fly.”  Just take a look at these photos or the linked video. My point here is that oceans contain many wonders and I feel bad for people in the Midwest who have never seen an ocean.  Of course, Midwesterners would tell us about the wonders in their own lands that we “coasters” ignore as we speed across the middle of the country. 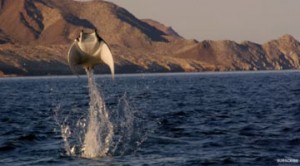 All three of my fiction books involve the ocean.  With which the Waters Swarm is about a herd of North Pacific fur seals threatened with extermination by seal hunters.  The Ages of Oosig is a fantasy about a boy growing up on islands in the Pacific and the adventures he has. My latest collection of short stories, Lefty’s Tavernacle, describes the goings-on of villagers in the small fishing town of Chickamin Bay (a fictional community similar to my hometown). No doubt my infatuation with oceans is because I’ve lived near the Pacific or Atlantic all my life, first in the Pacific Northwest, then in the Mariana Islands, now on the Massachusetts South Shore.

The vastness of the ocean, its power, and the constant pounding of waves on shores capture the imagination. Staring out at the horizon brings visions of long-ago ships and adventurers to mind. I can remember one time when I was commercial salmon fishing with my dad.  Over the radio came a voice saying “I think I just saw a sea monster!”  Turns out, one of the long-time fishermen had encountered his first elephant seal.  I once saw what I assumed was a mother shark and her baby trailing her, each with a dorsal fin sticking up out of the water.  When my father explained, “no, those are the first and second dorsal fins of one big mother of a shark,” I grabbed onto the gunnel of our boat.

I’ve determined that one of the reasons I used the ocean as a backdrop in my books is that it does stir the imagination.  After all, what could be better for an author of fiction that a good imagination?